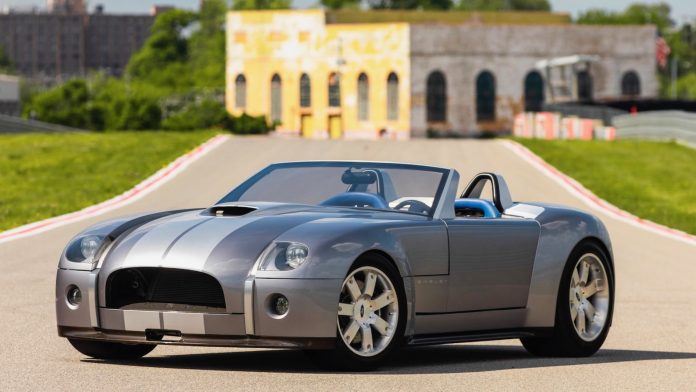 The 2004 Ford Shelby Cobra Concept will be auctioned. The one-off concept drivable vehicle, inspired by the iconic Cobra roadster, will cross the block at the Mecum auction in Monterey, California, scheduled August 12-14.

The Shelby Cobra concept, code-named “Daisy” debuted at the 2004 Detroit Auto Show. As of 2017, it has been owned by Chris Theodore, one of the designers who worked on it.

This concept was a product of the retro madness that gripped the auto industry in the 1990s and early 2000s. Ford had already launched a new, retro-styled Thunderbird when the Cobra concept debuted. Ford then launched versions of the GT and Mustang whose styling was inspired by their predecessors from the 1960s. Ford also built the Shelby GR1 concept in 2004 as a modern version of the 1960s Shelby Daytona coupe racing cars.

In contrast to most concept vehicles, the Cobra is fully ready to drive. It is powered by a 6.4-liter V-10, which, like the car itself, never went into series production. Other components come from the Ford GT, which was under development at the time.

Cobra creator Carroll Shelby gave the project his blessing and drove the car for promotional photos (even some donuts), but he probably didn’t have a lot of engineering effort. However, Shelby’s involvement was symbolic as it was the first time he worked with Ford since the glory days of the original Cobra in the 1960s.

Theodore paid $ 825,000 for the Cobra in 2017. Mecum doesn’t provide estimates before the auction, but when Theodore and the Cobra recently showed up at Jay Leno’s garage, auto appraiser Donald Osborne said the Cobra was worth $ 1.5 million. The car is not street legal, however, and the auction listing indicates that it will likely need to be sold to an out of state buyer due to California emissions regulations.

2021 Dodge Durango SRT Hellcat is in a category of its...